We are parents and educators committed to a just and equitable society. This blog is a forum to share ideas and resources to help us teach our children and ourselves about social equity issues.

Dr. Caitlin Ryan from the Family Acceptance Project came to our school in 2012 and screened the documentary, "Always My Son," about the parents in a Latino-American family accepting their son's gay identity. The FAP uses "a research-based, culturally grounded approach to help ethnically, socially and religiously diverse families decrease rejection and increase support for their LGBT children." Dr. Ryan has examined the interactions within hundreds of families with LGBTQ children, identified accepting or rejecting patterns, and linked those interactions to health and well-being outcomes for the LGBTQ children. Using this information, the project counsels and supports families who need help in accepting their LGBTQ child.

A wonderful and profound thing about the Family Acceptance Project is the manner in which it respects the cultural, religious and ethnic framework of each family, and helps each family accept its child's LGBTQ identity within that framework. Because of this, the group has had great success with families from traditionally conservative backgrounds which are not accepting of LGBTQ identity. Dr.Ryan begins with the assumption that families act out of love and a desire to protect their children. For families joined to faith or cultural communities in which LGBTQ identities are shunned, acknowledging a child as LGBTQ opens the child and family to social and spiritual exclusion. The FAP understands this fear and places the family's actions of rejection of the child in the context of a desire to protect the child. Then by educating the family about the malevolent effects of LGBTQ rejection on the child, and supporting their desire to protect the child from those bad outcomes, they nudge the family towards acceptance.

One of the statistics which Dr. Ryan presented which struck me was that 11-13% of middle school students, across a broad range of ethnic and racial identities, identify as lesbian, gay, transgender or questioning. If you have, see or teach middle school aged children, this means about 1 out of every 10 children you know is questioning or coming to terms with a LGBTQ identity for which there is relatively little support in our larger heterocentric culture.

I returned from the WPC 13 in Albuquerque last week, and it was again, tremendously thought-provoking. I wrote this essay, "Some thoughts from a white first time attendee of the White Privilege Conference for other white attendees," last year and would like to share it with you. WPC14 will be in Seattle next year, April 10-13, 2013 and will continue to develop its exploration of socially just parenting. Please consider joining the discussion.
Posted by Josie at 11:29 AM 2 comments:

Latinos in Hollywood and Mock Spanish

On a more academic note, Dr. Jane Hill, emeritus professor of linguistics and anthropology at the University of Arizona, has written extensively about the racist discourse of Mock Spanish which references the stereotypes Mr. Morales describes. Take a look at her essay, Mock Spanish: A Site For The Indexical Reproduction Of Racism In American English. The first chapter of her excellent book, The Everyday Language of White Racism, is also linked in the left hand column.
Posted by Josie at 10:06 AM No comments:

I want to share with you this new website and project of the Un-Fair Campaign, a group from Duluth, Minnesota. They have created a series of billboards, bus signs and public service announcements to educate the community about white privilege and racism. Their website has a wealth of links and resources. Take a look. My children found the posters particularly interesting and they provoked some great conversations in our family.
Fondly, Josie 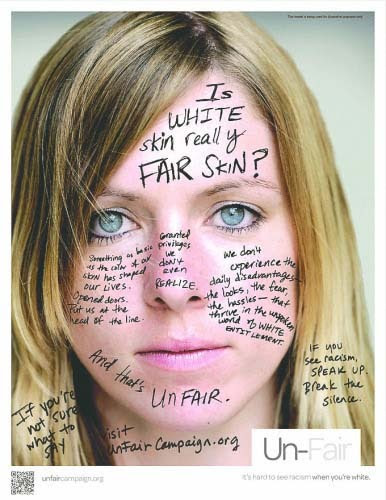 
I want to point your attention to a wonderful website maintained by the Southern Poverty Law Center,  Teaching Tolerance. It is a resource for teachers and parents and describes itself as "a place to find thought-provoking news, conversation and support for those who care about diversity, equal opportunity and respect for differences in schools."  I subscribe to the e-news which comes out every other week or so with excellent links and short blurbs. One of my favorite links in a recent e-news was this one: Sorting People from the PBS, Race: Power of an Illusion website. The teacher describes using the exercise in her 6th grade class. Click onto the Sorting People link yourself and give it a try. You may be surprised at the results.


When I first started reading the Teaching Tolerance website, I was moved by the writing, but felt a little underwhelmed by the title. Mere tolerance seemed a pretty low bar, a state of disdainful acceptance and gritted teeth reserved for annoying things like long bathroom lines or mosquitoes. Surely we can do better than just barely tolerate each other? Then I thought about how the word is used in immunology in the sense of tolerance to allergies. I read a recent interesting medical paper in JAMA which talked about childhood food allergies and the idea that a window of opportunity existed in childhood to expose children to allergens and to promote food tolerance.  The keys for healthy food tolerance, according to this paper, were early, progressive (larger and larger amounts), and persistent exposure. Maybe the same is true for the development of empathy and our ability to perceive our common humanity. While I believe that the window of opportunity doesn't shut after childhood, I do not doubt that a commitment to social equity requires progressive and persistent exposure, learning, and reflection.


Cheers to all who continue on this journey,

We had a Parent Diversity Roundtable today on the topic of social class and wealth in the United States. It was well attended, and although we really only scratched the surface in the 90 minutes allotted, it was a good beginning.

First we estimated how wealth is currently distributed in the United States between the 5 population quintiles and then estimated an ideal wealth distribution for maximizing societal well-being. We then compared our composite responses to actual US wealth distribution, with surprising and discomforting results. Our results mirrored the findings in this article, What We Know About Wealth  from Harvard magazine in which two professors performed the same exercise for a large sample of Americans.

We discussed the ways in which working class and poor people are both condescended to and feared in our society. These two short pieces, The anger of a first-generation student , an essay from a working class student at Wellesley College and an excerpt from Nickel and Dimed in America by Barbara Ehrenreich's book of same title give two perspectives from a working class viewpoint.

Josie
Posted by Josie at 2:06 PM No comments:

Happy New Year to everyone!


Before the school break, we held a screening of It's Elementary:Talking about Gay Issues in School, with a great discussion afterwards. One of the points noted was that "diversity education" is often perceived as of use and of interest to only a small, subset group of individuals. While an important part of this work is providing safety for those who are socially vulnerable, in actuality, diversity education is about building life-long skills to negotiate community and conflict for everyone. Diversity education helps a child successfully answer the question, "How can I meet my needs without hurting other people?" To be successful adults, (and I define successful in the sense of full psychological and spiritual emancipation) our children need to be able to respect, communicate and work with people of different skin colors, different languages, and different economic backgrounds. The more information and skills we can encourage to help our children move beyond the constraints of their own viewpoint, the more successful they can be.


To continue the conversation, here is a link to an online booklet, Queer Youth Advice for Educators. You can read it online, print a PDF or order a hard copy. It is a collection of insights from LGBTQ youth about their educational experiences, and ways in which they felt supported or abandoned in the process. A compelling read. 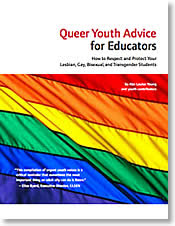